Answering the Age-Old Question Once and for All

We’ve all been there, friend. We get up in the morning to find the cream cheese tub waiting ominously on the kitchen counter from the night before. It can’t be helped. It’s no one’s fault.

You just wanted a quick snack, nothing fancy, a few breadsticks to dunk for supper. You leave it out because you may be back for more, but the food makes you drowsy, and you hit the hay, totally forsaking all that cheese out in the dark, alone, with the temperature rising.

Still shaking the dreams off, you wonder to yourself if cream cheese can survive in the great outdoors. It kind of seems like the sort of product that may fare well in a dry store.

You try to use your partner as a guinea pig, but they refuse to try it. You do the smell test, but cream cheese never smelled all that good to begin with. The only thing left to do is the dreaded taste test, but before you go dipping your finger in, there are a few things you should know. 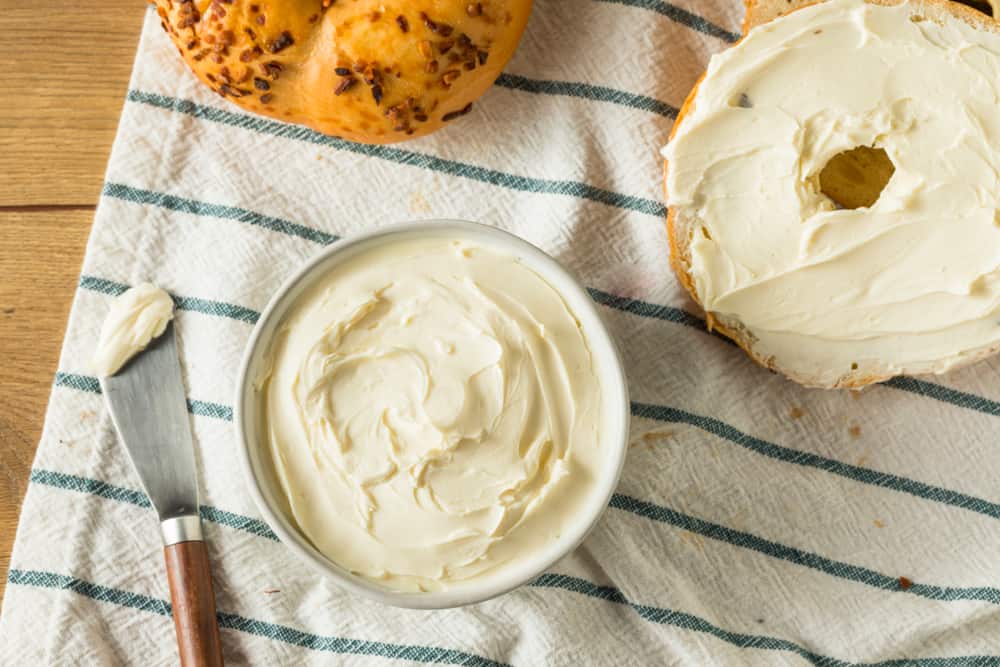 It’s devastating, but no, cream cheese isn’t suitable for unrefrigerated storage. That big old tub ain’t fit for nothing but the recycling plant, and the cheese...well, the cheese is smearing crackers in dairy heaven now.

Of course, there are exceptions. If you can somehow keep your cream cheese’s temperature down, it doesn’t matter that it’s out.

So if your question is, can you leave cream cheese out in the snow? It’s not very hygienic and even less practical, but yes, it will be edible.

If you have access to a cold room with powerful air conditioning, as long as temperatures don’t rise above 5 degrees C, your soft snacking companion will survive.

How Long Can Cream Cheese be Left Unrefrigerated?

It’s important to study up on the duration your food can spend outside of the fridge before it begins to perish.

It’s a sort of temperature equivalent of the 5-second-rule (but less gross). This grace period will differ from food to food, but generally speaking, the rule is to get it back home into the fridge as soon as humanly possible, but if you needed time, how long would you have, maximum?

According to the FDA, your cream cheese can survive out there in the bare wilderness of your countertop for two hours, providing the area is room temperature which is between 20 and 27 degrees C.

If your poor cream cheese is left to fend for itself in temperatures of 32 degrees C or above, you have a single hour to get it back into the cool zone before it’s no good to anyone.

What Happens if You Don’t Refrigerate Cream Cheese?

When cream cheese hits a certain temperature, it becomes very homely to nasty bacteria such as E.coli. You can then look forward to some pretty telltale signs your cheese walks the valley of the shadow of death.

The first thing you’ll notice is an excessive amount of separated moisture and a taste that’s gone from creamy delight to nauseating sour tang.

If you leave it out even longer, you’ll notice that it dries up and hardens. After that, mold will appear in spots at first, but will eventually expand into complete coverage. At this stage, it will have a very cloying and earthy damp smell, making even those with stomachs of steel, wretch.

Why Does Cheese Taste Better at Room Temperature

So, we’ve established that awful truth that cream cheese cannot be kept at room temperature, but here’s the real kicker...for the most part, cheese actually tastes better when slightly warmed up.

I’ve cut down on cheese in recent years, but if you’re anywhere as ravenous for the yellow stuff (or white in this case) as I was, you’ll have picked up on this. Harder cheese can be quite brittle and muted when cold, rather than sharp and delicious.

Medium-soft cheeses come across as a little bland as opposed to rich and mature. Soft cheese like brie can have a rubbery mouthfeel instead of their scrumptious creamy texture. It’s not just cheese.

Most dairy products change in flavor and texture when cold. Ever had a chocolate bar straight from the freezer? It nigh-on breaks your teeth, and it takes a little while for the flavor to translate, but why is this the case?

Unless you’re a creationist, the answer is evolution. Humans have evolved to prefer warm food and to digest it more efficiently.

So, the increased pleasure your taste buds feel once the fat in cheese has had time to warm and loosen is sort of like an internalized conditioning technique, persuading you to eat warmer foods.

But If Warm Cheese is Better, How Can You Enjoy it Without it Making You Ill?

The best way to prepare cheese for optimal flavor whilst eliminating the chances of a tragic cheese-based death, is to let it rest in a room temperature environment for around half an hour, then munch it over the next hour and a half.

What Will Become of Me if I Eat Spoiled Cream Cheese?

The severity of the reaction your body will have depends on how spoiled the cream cheese is.

Although it’s highly recommended to replace your creamy friend in the fridge before two hours have elapsed, the likelihood of it having a negative effect on your stomach after being out for three or four hours is minimal.

If you have a particularly sensitive stomach, you might feel slight discomfort, but little else.

If for some unholy reason you decide to eat some cream cheese after a couple of fridgeless days, E.coli, Salmonella, Brucella, and Listeria among others, will be well into their bacterial invasion, increasing the risk of food poisoning.

Should you contract food poisoning, you may experience stomach pain, vomiting, and diarrhea, which can be fatal in serious cases.

Surprisingly, if on a dare, you ate moldy cream cheese, the mold itself probably wouldn’t make you ill at all because it’s a pretty delicate fungal organism. It’s no match for your stomach acid. You’d have to eat vast amounts of mold before it even had the slightest effect on your health.

Cheese is pretty tasty stuff; there’s no question. It’s one of the greatest comfort foods in the world, a food friend whose shoulder you can cry on and then spread generously over toast.

But if there’s one thing you should take away from this article, it’s that without proper care, cheese can also betray us.

Fortunately, now you’re fully informed of the dangers, you’ll never have to taste or sniff questionable cheese ever again, hurrah!

How To Tell If Cream Cheese Is Bad

Can You Freeze Shredded Mozzarella Cheese?